The phenomenal success of Wizards of the Coast's Magic collectible card game is unparalleled in card gaming history. Although it stands to reason that computer games based upon this property would probably be a success, an automatic assumption of accomplishment is not always warranted (see Magic: The Gathering - Battlemage). However, in the case of Magic: The Gathering for Windows, MicroProse has cast a successful spell.

The guts of this title consist of the card game itself, populated with almost 400 actual Magic cards that can be used in play. Cards are used to cast spells, and most spells are split by color: White magic enables healing and protection, Red magic is fueled by the power of fire and earth, Blue magic is drawn from the strength of air and water, Green magic is spawned from the force of nature, and Black magic is bred from the might of death and decay. Each color has a specific type of land, called Mana, which must be used to supply power of the correct color to cast any spell. There are also colorless Artifact cards, which can be powered by any color combination of Mana. The player will also find twelve special cards created especially for this product, called the Astral Set, which do not appear in printed card format.

Want even more Magic? Upgrade to a full account for only $9.99 to get access all of Magic Online’s features, including trade, chat, and the full store. Collect or trade for cards to play in a multitude of formats, from Standard to Vintage to everything in-between, all on your schedule! Note that Magic Online is available for Windows PC only.

There are a couple of different varieties of gaming available in Magic: The Gathering, although they are all geared toward playing the card game itself. First, the player can simply play the card game against opponents sporting different decks. Players can duel in single-match mode against one opponent, or in a ladder-style tournament against a collection of opponents. To aid the player in building a killer deck, a Deck Builder utility is also included with the product, enabling the player to add cards to or delete cards from his deck. Decks created in this way can be saved, and tested against the decks of the AI opponents. For those of a more adventurous ilk, an RPG-like adventure game is also included. The player's responsibility is to travel the world of Shandalar, dueling creatures and wizards for control of the magical land. As play progresses, the player will discover new cards hidden on the map, as well as have the opportunity to buy those of his choosing. He will encounter dungeons and crypts populated by monsters of different varieties, each equipped with a deck of Magic cards accentuating strengths in certain types of magic. When an enemy is encountered, the player will be taken to the Duel screen to fight the battle.

Overall, this is an exceptional game with a few, very minor difficulties that do not detract from the finished product. MicroProse has done an outstanding job in translating what is a very difficult and complex game into a product that is accessible for both novices and experts alike.

Graphics: Although I have heard a few complaints about the graphics used for the adventure map of Shandalar, the average player will not spend enough time there to be concerned with this. The graphics in the Duel portion of this game are remarkable, with some cards showing a real, 3D look in 16-bit graphics mode.

Sound: The sound is occasionally scratchy, and it sounds to me as though some sounds play louder than others. However, this is a minor quibble.

Enjoyment: For anyone who enjoys the challenges of a magical, mystical world, this is an ideal product. Anyone who is already a fan of the Magic card game should absolutely adore this product.

Replay Value: Replay value is high, because of several factors. The player can select from numerous opponents to battle in tournament fashion, and the world of Shandalar is regenerated anew at the start of each new game.

The eponymous Magic: The Gathering is quite easily the best adaptation of the collectible card game you will ever play. While it adds an adventure storyline aspect to the game, it doesn't sacrifice the heart of the card game upon which it is based. 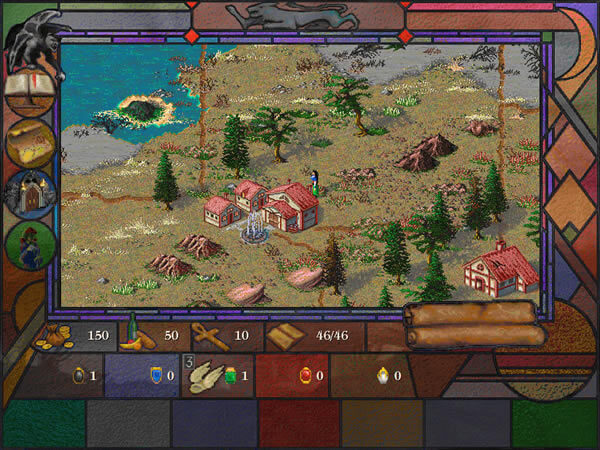 Duel mode consists of a quick match or series of matches against your opponent using one of many prebuilt decks or using one of your own design. You can choose from a comprehensive collection of Alpha, Beta, Unlimited, Revised, and 4th Edition core sets, as well as the Arabian Nights, Antiquities, Legends, and The Dark expansions. Alternatively, Duel mode can be played as a sealed deck format tournament, starting with six sealed starter boxes or booster packs of your choosing.

World mode is the story campaign of the game. You find yourself in the world of Shandalar where five wizards, one from each of the governing colours of MTG, are conspiring to raise a great evil. It is up to you to prevent them from bringing destruction to the world. You start with a basic deck of one or more colours, depending on the difficulty level you choose upon starting the game. Cards are won by ante, found, earned through quests, etc.

The user interface while dueling can seem a little convoluted at first, but handles the play mechanics of the card game well - players familiar with the Magic: The Gathering card game will feel right at home once they get used to this UI. Players unfamiliar with the card game may have a slightly hard time getting into and learning the game but an interactive Tutorial has been included to facilitate this.